I came across an envelope with notes and materials from my days as a disc jockey on The Last Radio Show, the late night, student-programmed radio show that closed the broadcast day for classical music station KVNO, 90.7 FM, in Omaha, Nebraska.

The station was licensed to the University of Nebraska at Omaha (UNO) and employed numerous students. But Monday through Saturday, from 10:10pm to 2am, the station relinquished its format to six mass communication majors, who were allowed to play free-form, unfettered, album-oriented music. In January 1977, I was given the Friday night shift. It was mine to program for the next 52 weeks, unless I really did something wrong.

Every night on The Last Radio Show (LRS), a new release was showcased as the evening’s Feature Album. The idea was to play at least one track from the featured album every hour during your four-hour shift. Typically the program director (an appointment bestowed by the faculty/management upon one of the LRS jocks) would assign an album he thought you might know something about. Sometimes the new release was simply foisted on you – and in 1977’s pre-Google world, it made researching unknown bands difficult.

My first feature album was Bill Quateman’s Night After Night. Quateman was a Chicago singer-songwriter who has been successful over the years, and should’ve generated more fame for his music. Night After Night was Quateman’s first release on the RCA Victor label. Oddly enough, I had heard much of this album at a 1975 Styx concert in Lincoln, Nebr., when Quateman opened for his hometown contemporaries (who were about to hit it big). In ’75, Quateman was coming off his 1972 release for Columbia Records and he was looking for a new record deal – a deal that wouldn’t materialize for another two years.

When I saw Quateman open for Styx, he referred to his band as The Tuxedos. It featured Caleb Quaye on guitar, Tom Radtke on drums and Rollo Radford on bass. Months after that show, Quaye would leave to join The Elton John Band. Quaye performs on Night After Night, but he was gone from the scene by 1977.

I picked two songs from Night After Night that I had heard in concert (the title track being one, Carolina was the other) and two other tracks. Quateman is my kind of musician. He dabbles in all genres of music and sound. Some have compared him to Eric Carmen or Harry Nilsson or early Elton John — for his piano playing and crooning. But the man could rock and drift into funky, jazz grooves, too. Night After Night would peak at #129 on the album charts in the U.S.

On February 4, my feature album was Makings of a Dream from the California funk band called Crackin’ — which our program director misspelled in his report to the record labels (see page 3 from the report below — Warner Bros. Records had to be unimpressed by this).

Crackin’ was fronted by a former Omaha musician named Lester Abrams. Abrams is probably best known for winning Grammy Awards for his work on The Doobie Brothers’ Minute by Minute album. Abrams arranged “What a Fool Believes” and co-wrote “Open Your Eyes” and the LP’s title track.

In Crackin’, Abrams sang and played keyboards. Other members of the band included Rick Chudacoff on bass, Leslie Smith on vocals, and Arno Lucas on vocals and percussion. Chudacoff has gone on to a career producing music for big name artists from various music genres. He’s been called a “noted Nashville hitmaker.”

Makings of a Dream was the second Crackin’ album. I had purchased, and still own, the band’s 1975 self-titled release on the Polydor label. “Take Me to the Bridge,” with its refrains of the album’s title, is still a great track. The entire album contains smart, funky sounds, but listeners could’ve easily assumed they were listening to The Average White Band or Earth, Wind & Fire.

Attached are pages 2 and 3 from The Last Radio Show’s report to the record labels. It shows the remaining Top 25 albums played between January 24 and February 5 (the first 14 can be seen in the attachment from my last post). The pages also list the tracks from the feature albums my classmates chose to play on their night of free-form radio — David Bowie, Milton Nascimento, The Average White Band, Chick Corea, Leon Redbone … 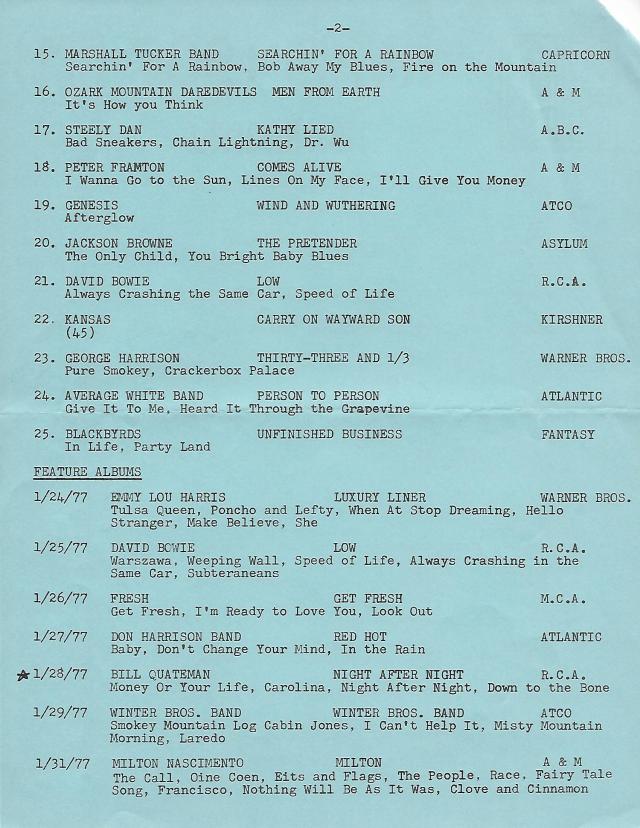 “The San Francisco band with the novel feature of three lead singers and a grand total of seven steaming instrumentalists.” – from Feb. 22 ad in Billboard