Guess who my first rock concert was

April 9, 1970, was my first rock concert: The Guess Who at Omaha’s Music Hall, an intimate venue with black walls, a black stage and about 2,400 burgandy-colored cushioned seats on the floor and balcony. I would eventually see more shows at the Music Hall — often newcomer artists who our local university or promoters took the chance to book (e.g., Bruce Springsteen or Rancid).

In 1970, I was drawing a comic strip for the Teen Scene section of the Omaha Sun newspaper, the weekly newspaper owned by Warren Buffet’s Berkshire Hathaway. I wasn’t technically a teen yet (I was still attending a grade 1-8 elementary school at the time), but my drawings and goofy sense of humor, influenced by Mad magazine and Warner Bros. animation, got me the gig. Once a week I hung out with students from all the different, cool high schools around town as they talked about music, fashion, movies, and what was “in” and “out.”

After four months of drawing my cartoons, the Teen Scene’s editor (Pete), who also reviewed movies and concerts, asked me if I’d like two comp tickets to see The Guess Who’s early show. The band was performing two shows, and Pete was attending the later one. I quickly said yes because I was familiar with the group’s past hits (“Laughing” and “Undun”) and I had bought the 45 rpm single of “No Time” when it came out in November.

I came home with the tickets and was pleasantly stunned that my parents would allow me to attend. My dad even said he would drive me and my friend Paul to the venue and pick us up after the show. (As I type, I wonder what my dad thought of the crowd milling about the Music Hall.)

We had great seats, three rows from Randy Bachman’s side of the stage. The band played several songs off their latest album American Woman, which was released in February. I loved hearing the longer version of the title track with its acoustic opening and Burton Cummings’ crooning (my local Top 40 station only played the single edit), as well as the album version of “No Sugar Tonight/New Mother Nature.” I remember Bachman switching guitars frequently during songs (which I thought was so cool). Bachman and Cummings both rocked out on guitars during the encore “No Time.” And, during “The Key,” Garry Peterson introduced me to the obligatory rock show drum solo — I was enthralled.

I thought the band’s set and performance were fantastic, but the reviewer for Omaha’s daily newspaper did not.

Looking back at his review, it’s seems quasi-Almost Famous — a thought piece about a band trying to find itself. He thought Bachman’s guitar work was “rather ordinary,” but I relished his solos and sound. Sadly, Bachman would leave The Guess Who by the end of May. 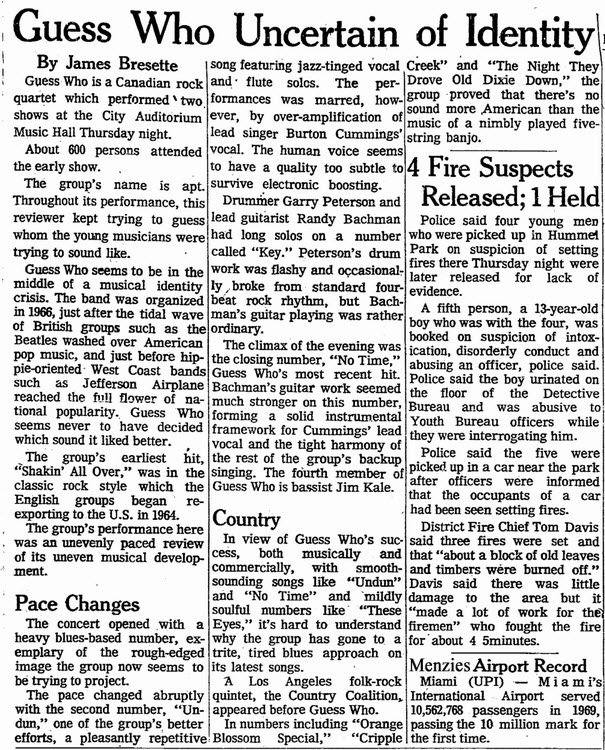 The concert set me onto a path of loving live music and trying to attend shows whenever I could afford them (and could get the night off from work). 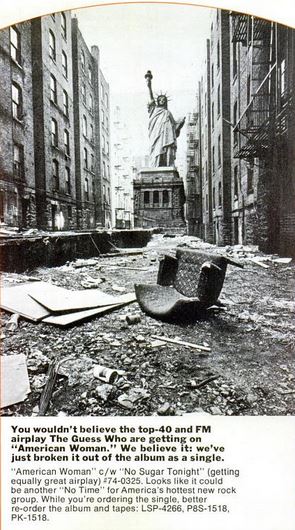 An ad for The Guess Who and the single “American Woman” from the March 14, 1970, edition of Billboard magazine.

I am a seasoned consumer of modern (and not so modern) culture.
View all posts by poppaculture →
This entry was posted in '70s Music, Music and tagged 1970, American Woman, Burton Cummings, Garry Peterson, Jim Cale, KOIL music survey, No Time, Omaha Music Hall, Omaha Sun newspapers, Randy Bachman, The Guess Who. Bookmark the permalink.